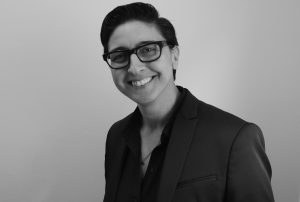 As VP, Executive Creative Director, AJ leads transformative campaign work across all clients and new business efforts for R/GA Chicago to deliver holistic, innovative brand building work. A nimble, problem-solver and a strategic-minded storyteller, AJ creates brand relevancy through integrated, authentic, purpose-driven work across not only a spectrum of categories – insurance, CPG, retail, beverage and auto – but across mediums of film, print, radio, social and interactive.

Most recently, AJ led development for the LIFEWTR #ArtByAWoman campaign, driving awareness of the lack of women artists being represented in the art world to rally a movement to bring more artwork by women out into the open. Since launching in 2017, LIFEWTR has gone on to win awards at the International Epica awards, the Webby’s and most recently, the Effies. She also partnered with the R/GA Brand & Design team and Pepsico to launch Bubly, their playful new spin on sparkling water.

Prior to R/GA, AJ was a VP at Leo Burnett, where she became an Emmy Award winner for her work on the Always #LikeAGirl campaign. A leading industry model for purpose driven work, #LikeAGirl challenged gender bias, and struck an emotional chord that’s captured top over 100 million views worldwide, and top honors at industry shows, including 14 Cannes Lions including a Glass, Titanium, and PR Grand Prix.

Driving conversation and relevancy is a hallmark of her work, also reflected by the #EqualDreams campaign for Esurance that championed support for marriage equality in advance of the landmark for Supreme Court ruling, as well her work on the award-winning Mean Stinks anti-bullying campaign that spread through schools across the country for P&G’s Secret Deodorant.

AJ is a 2018 “ADCOLOR One Club Creative” honoree. She was also recognized as one of “Campaign Us’ 2017 Digital 40 over 40”, featured in the AdAge “Creatives You Should Know” 2015 Cannes Issue, and named most awarded copywriter by AdAge 2015. AJ is a member of the Television Academy as well as She Runs It Chicago.