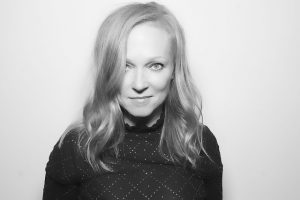 KERSTIN EMHOFF is co-founder & president of PRETTYBIRD, a production company she established with director Paul Hunter in 2007.

PRETTYBIRD features an incredibly diverse roster of filmmakers, creatives and collaborators that create innovative and inspiring content in all entertainment media.  PRETTYBIRD was just named Creativity’s 2015 Production Company of the Year.

Kerstin is recognized for her successful and enduring relationships with top agencies, clients, artists and management. She is a passionate and creative producer, with experience in all forms of media.  Under her leadership, the company has collected Grammy, Emmy, D&AD, Cannes Lions, Clios and MTV awards.

A partnership with Passion Pictures has also seen Kerstin executive produce feature length documentaries that include the Emmy-nominated Sergio, the Academy Award-shortlisted The Tillman Story, and Manhunt, a film revealing the true story behind the CIA’s hunt for Osama Bin Laden. All three films aired on HBO in addition to playing at Sundance, with Manhunt winning a Primetime Emmy for Best Documentary or Non-Fiction Special.

In 2011, Kerstin established PRETTYBIRD UK, successfully extending the company’s reach to Europe. She has served on the AICP Board for over ten years, including two terms as AICP/West President, and was named Chairperson of the 2015 AICP Show.